Not what the American people ordered – HR 2749, martial law and the enslavement of their farmers

By The Writers’ Collective

HR 2749 is a strange bill in many ways.  While the other “food safety” bills have been around since winter, allowing for much public discussion on the internet, HR 2749 has only suddenly appeared.  It is a mutant conglomeration of the worst of the other bills, with the addition of one very original part – martial law.

When it was a draft, it was Waxman’s bill.  But once given a number, it became Dingel’s who already had a “food safety” bill, HR 759.  So Waxman got none and Dingel got two.  (Was this because Waxman, being Jewish, was a hideous choice to introduce a bill with Codex in it – designed by the Nazi pharmaceutical companies that funded Hitler, provided the gas for the gas chambers, experimented on prisoners with vaccines – and is expected to kill millions?)

* HR 2749 would give FDA the power to order a quarantine of a geographic area, including “prohibiting or restricting the movement of food or of any vehicle being used or that has been used to transport or hold such food within the geographic area.”

[This – “that has been used to transport or hold such food” – would mean all cars that have ever brought groceries home or any pickup someone has eaten take-out in, so this means ALL TRANSPORTATION can be shut down under this.  This is using food as a cover for martial law.]

Under this provision, farmers markets and local food sources could be shut down, even if they are not the source of the contamination.  The agency can halt all movement of all food in a geographic area.

[This is also a means of total control over the population under the cover of food, and at any time.] See this DailyKos entry.

The bill is unusual, too, because slow as it was to appear. The little bugger of bill has made up for it since.  It got a number on June 10, went to committee on June 17, passed instantly, and is headed for a vote on the floor of the House.

The first Patriot Act was passed using fear of terrorism. This Patriot Act is more coy, hiding under a cloak of “food safety” and but also using fear – fear of food contamination.  Evidently, Americans are supposed to be so frightened by the slightest possibility of a terrorist or of E-coli, they would trade away all their precious, hard fought freedoms for the promise of safety.  Or at least, that is what the trade-off has become.  “Terrorism” and “contamination” are great bugaboos used to open doors to an end to the US Constitution.  That is exactly what we are left with after those who wrote HR 2749 are done.

Who did write these bills?  It seems Monsanto had not only a hand, but a “defining” influence. http://farmwars.info/?p=594

This redefining of reality is what seems to be underlying all the loss of freedom.  Normal and free are disappearing into the maw of corporate definitions of reality. See this Yup Farming piece.

So, we begin with contaminated food from filthy corporate processors and concentrated animal feeding operations (CAFOs).  And what do we end up with after that reality is ground up by corporate legal hands?  Changes in the definition of risk so that natural things are treated as dangerous and toxic things are untouched, such that:

Thanks to corporate control over reality, our wanting to clean up corporate processors and feedlots and CAFOS and end up with farmers’ markets and local farms and organic food has become the industrialization and potential destruction of every healthy part of the food system and the triumph of the most contaminated and toxic part.  And in the non-bargain, we lost all freedoms and they took all control.  And “all” is not a hyperbole here, for one need only look at another provision of HR 2749 to feel how insane, how distant from all we ever wanted.

* HR 2749 would empower FDA to regulate how crops are raised and harvested.  It puts the federal government right on the farm, dictating to our farmers.

[What is missing in pointing out this astounding control, is that it opens the door to CODEX and WTO “good farming practices” will include the elimination of organic farming by eliminating manure, mandating GMO animal feed, imposing animal drugs, and ordering applications of petrochemical fertilizers and pesticides.  Farmers, thus, will be locked not only into the industrialization of once normal and organic farms but into the forced purchase of industry’s products.  They will be slaves on the land, doing the work they are ordered to do – against their own best wisdom – and paying out to industry against their will.  There will be no way to be frugal, to grow one’s own grain to feed the animals, to raise healthy animals without GMO grains or drugs, to work with nature at all.  Grassfed cattle and poultry and hogs will be finished.  So, it needs to be made clear where control will take us.  And weren’t these the “rumors on the internet” that were dismissed but are clearly the case?]  See this DailyKos entry.

When we wanted not to get E-coli in processed meat, did we intend to put our farmers into corporate servitude?  Did we plan to have our own lives straight-jacketed by a million new controls over our own gardens, our own desire to grow food, our own plans to start small businesses, our own dreams to have a small piece of land and farm ourselves?  Who has the audacity to take our needs and grotesquely bastardize them in these ways, while giving the destruction and totalitarian control the sham name of “food safety”?

We wanted good food.  We never wanted to trap our farmers into an industrial prison on their own land, afraid moment to moment of not fulfilling some monstrous set of instructions that never end – rules the farmers loathe, rules that have not only nothing to do with real farming but which are antithetical to it.  Why have we ended up with HR 2749, an intense corporate nightmare around the most central and necessary aspects of a free country and of free human beings – farming and food? 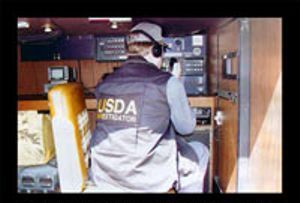 American farming needs to be relieved of the burdens it has been under, not finished off by its corporate competition.  It needs freedom to flourish again.  Obviously – and Congress people who would think to vote for such absurdities, take note – the imposition of surveillance, monitoring, warrantless entry, taking of all records, licensing, fees, Codex and NAIS, in addition to massive penalties and prison terms (all without judicial review over even appropriateness and validity), are not how one thanks American farmers for holding together the only working part of our food system.  See Literal Enslavement by Linn Cohen-Cole.

HR 2749 is the most vicious and insane bill one could imagine.  Who treats our farmers in this way?  Who believes that such police measures can provide for the rebirth of farming and the return of healthy food?  Who wrote this bill that trashes the freedom of all our lives?  HR 2749 was not what we ordered and it should be sent back the bowels of hell it came from.

HR 2749 is both insane and cruel.  And the deceptiveness of hiding a Patriot Act in it and the brutal rush to slip it through Congress are ANTI-democratic.