Support Senate Bill 3417, the Research in Aquaculture Opportunity and Responsibility Act of 2010

Ocean factory fish farming, also known as offshore aquaculture, involves growing thousands of fish in large cages and net pens in open ocean waters. These facilities threaten coastal and fishing communities, consumers, and the health of our oceans. A new piece of legislation would protect us as well as our marine environment by requiring a detailed report on the impacts from ocean factory farms worldwide. The bill would also ban these facilities for up to three and half years in our federal ocean waters while the report is prepared and reviewed.

Like factory fish farms on land, ocean fish farms are generally big, dirty and dangerous. Bad for the environment: Uneaten fish feed, fish waste and any chemicals or antibiotics used in the operation flow through the cages directly into the ocean. This can significantly harm the ocean environment. Caged fish can escape and overtake or interbreed with wild fish, altering natural behavior and weakening important genetic traits. Openwater salmon farms in the North Atlantic have over two million fish escapes each year — not an example we want to follow in U.S. waters. Farmed fish, caged or escaped, can also spread disease to wild fish.

Bad for communities: Factory fish farms can interfere with the livelihoods of commercial and recreational fishermen by taking over traditional fishing grounds or harming wild fish populations. Plus, these fish farms are likely to follow existing seafood trade patterns and ship their product elsewhere for higher profits, leaving the United States with damaged habitats, depressed local economies and no new food sources. 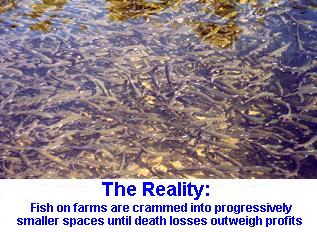 Ocean factory farming is unlikely to increase the domestic supply of fish, as the fish grown in such operations are often carnivorous — they require animal protein to grow. Often farmed fish are fed diets that include small, wild fish, so the practice can reduce the amount of food in the ocean for larger wild fish, marine mammals, birds and people, too — especially in the various countries where smaller fish are a main source of protein. Often it takes many pounds of wild fish to grow just one pound of farmed fish. This resultsin a net loss of seafood and ultimately decreases food security in the United States and across the globe.

The current push for ocean factory fish farms in U.S. federal waters (between three to 200 miles off the coast) began under the Bush administration and has continued through the Obama administration via the National Oceanic and Atmospheric Administration (NOAA). NOAA, the very agency tasked with conserving and managing our ocean resources, is oddly one of the strongest promoters of the industry. Right now, NOAA is crafting plans for a new federal policy to promote ocean fish farms, instead of pursuing other, more sustainable options to supplement wild domestic seafood.

Protecting Our Oceans and Ourselves

The Research in Aquaculture Opportunity and Responsibility Act of 2010 (S. 3417), introduced by Senator Vitter (RLA), gives the waters off our coast up to a three-and-a-half year reprieve from the threat of factory fish farms. There is no good reason to move forward with offshore aquaculture until we have fully evaluated the impacts, especially on communities, wildlife and consumers, and determined whether it’s a safe option. The bill will do the following:

• Prevent the approval of plans, permits, rules and regulations for offshore aquaculture permits for three and a
half years.

• Require the Secretary of Commerce to submit a full report to Congress including:
 * Impacts to native fish species from offshore aquaculture operations around the world
 * Economic impacts to recreational and commercial fishing
 * Impacts on coastal communities
 * A full analysis of environmental issues and impacts
 * Recommendations on regulatory guidelines to protect native fish species/populations

• Require the Secretary of Commerce to review alternate, more sustainable options to supplement wildcaught
seafood by submitting a full report on the potential for land-based recirculating aquaculture systems and providing grants for such research.

This new legislation not only helps to protect our oceans from negative impacts of factory fish farming — it also helps move us toward a better future. While offshore aquaculture comes with many negatives and guarantees no positives, there are options that can be combined with improved stewardship of our wild fish populations to increase supply of safe, sustainable seafood, create new green jobs and protect the marine environment.

Some forms of shellfish can be farmed sustainably, including mussels, clams and oysters. Farming these species does
not involve the use of chemicals or wild fish in feed, and in some cases can help improve water quality. There’s also a technology supported by this bill to grow fish on land in closed-loop, low-energy, high-yield operations that reuse nearly all the water initially put into the system. These systems can create jobs and increase local seafood supply in a variety of locations.

Multinational corporations have forever changed the way food is grown on land — to the detriment of public health, the environment and local communities. Senate Bill 3417 can help steer us toward a more sustainable future for seafood and protect our oceans, coastal and fishing communities and consumers.

To help protect our oceans, go to www.foodandwaterwatch.org/fish for more information.

5 responses to “Protect Our Oceans from Factory Fish Farms”