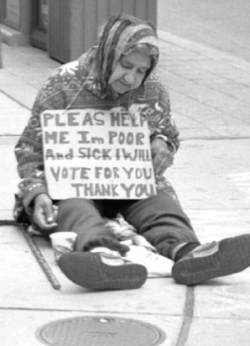 Miami Commissioner Marc Sarnoff has created regulations around giving food to the homeless that few could meet and that would apply a fine and imprisonment to anyone trying to do so in the old fashioned way: “Here is a little something to tide you over. We wish you the best.” Try to be generous again, and the fine goes up and the jail sentence gets longer.

Commissioner Sarnoff is using “food safety” as a cover for criminalizing donating food to the homeless.

The ordinance must be put in context, for Commissioner Sarnoff is not alone in what he is doing to shut down rights around food. The City of Orlando recently won an appeal in federal court allowing it to criminalize feeding groups of 25 or more homeless people. The Miami ordinance goes further, banning all free food distribution without a government license.

“Food Safety,” in fact, is the chosen weapon in the next major corporate assault on this country, after Goldman Sach’s destruction of the economy, and its food speculation that drove up prices and the number of starving people.

This time the corporations and banks want control over all food. They have not finished making money off misery.

But to gain full control over food, it is necessary to break all normal interactions and our natural generous connections around it, and to come up with a phony reason that would “sound” caring but would allow only corporations to handle food.

Their reason: Food is scary! And Americans and American farmers are too dirty to share or sell it!

The joke is that those who are actually killing us with contaminated food have used the fear they generated from the deaths they caused, to sell the country their bugaboo of “Food Safety.”

The “food safety” concern for the homeless in Miami is false – they are not dying from bad food or even getting sick from food people are donating to them, and they certainly aren’t complaining about the food. So, why did this ordinance pop up, even as millions more Americans are in need thanks to Goldman Sachs?

An aide in Commissioner Sarnoff’s office told me that the increasing number of homeless in the area are bothering people.

The “food safety” ordinance provides Commissioner Sarnoff a disguised means to get rid of homeless, not to help them. It is phony “humanitarianism” wielded as an immoral weapon.

This disguised corporate assault on our rights to food is not just happening here. It is international. Dr. Vandana Shiva discusses international food laws in this brief excerpt from a 2006 speech:

Though Americans have, for thousands of years, been buying all kinds of food from farmers and sharing food with each other and running small businesses based on food, here are just a few of the changes the corporations have wrought in everyone’s lives, as they insidiously remove everyone’s rights around food itself, using the cooked up justification of protecting people:

At a time when the country has lost millions of jobs and is losing more, and people who are unemployed can’t find work, corporations are working to prevent people from going into food businesses and eliminating all kinds of active food businesses by getting governments to raise “food safety” standards of all kinds, until no one can afford to comply.

But they have reached the bottom of the moral barrel when they use “food safety” to try to stop one human being from sharing food with another, from possibly even saving a life. The corporate need to control food is now so great that giving food away for free interferes, and generosity with food must be stopped with jail and fines.

Millions more Americans are in need thanks to Goldman Sachs. This Miami ordinance is meant to stop people there from sharing food with fellow Americans in need. In Miami, is starvation preferable to food provided without a government class in food safety?

The FDA “food safety” czar recently asserted in court, “Food safety” is most definitely not about protecting anyone’s health. It is openly about removing American’s rights to food and the most fundamental right to health itself. According to an FDA court brief, in a recent case against raw milk:

* There is no absolute right to consume or feed children any particular food.

* There is no ‘deeply rooted’ historical tradition of unfettered access to foods of all kinds.

* Even if such a right did exist, it would not render FDA’s regulations unconstitutional because prohibiting the interstate sale and distribution of [insert the food you consider most essential to your health] promotes bodily and physical health.

* There is no fundamental right to freedom of contract.

Miami Commissioner Sarnoff’s contribution to this international corporate assault on human beings’ right to food is not just an immoral ordinance, but an aggressively anti-moral one, akin to slapping one’s child for sharing food with a sibling.