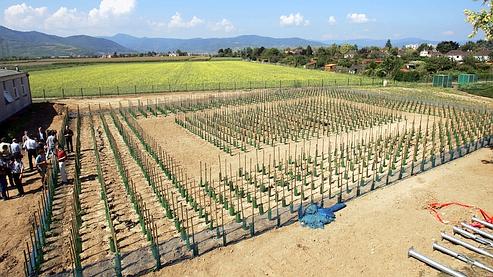 The French vineyard is the same field attacked last year when the plants were only cut. But the security features installed after that incident kept authorities at bay while the group accomplished its mission yesterday.

Speaking for the group, Olivier Florent told Le Figero that they condemned the use of public funds for open-field testing of GMOs “that we do not want.”

Pitching tents in the rain near France’s National Institute for Agronomic Research (INRA) site in Colmar the night before, the group waited until 5 AM before converging on the site and locking the gates behind them. They uprooted all 70 plants, then submitted to arrest.

This is the second attack on GMO crops to make international news this year. In July dozens of people destroyed two experimental corn crops in Spain. In an anonymous press release, they wrote, “This kind of direct action is the best way to respond to the fait accompli policy through which the Generalitat, the State and the biotech multinationals have been unilaterally imposing genetically modified organisms.”

In the late 1990s, Indian farmers burnt Bt cotton fields in their Cremate Monsanto campaign. Monsanto did not disclose to farmers that the GM seeds were experimental. “Despite the heavy use of chemical fertiliser, traces of which still can be observed in the field, the Bt plants grew miserably, less than half the size of the traditional cotton plants in the adjacent fields.”

After the Haiti earthquake this year, Monsanto offered 475 tons of hybrid corn and terminator vegetable seeds in partnership with USAID. In June, 10,000 Haitian farmers marched in protest of the “poison gift” which produces no viable seeds for future plantings and requires heavy chemical inputs. Haitian farm leader Chavannes Jean-Baptiste observed that the biotech plan makes farmers dependent on multinational corporations.

In the US, GMOs were secretly foisted on the public in the mid-1990s, and only now is the US Supreme Court addressing the scourge. In June, the high court upheld partial deregulation of GM alfalfa, which permits limited planting while the USDA prepares an Environmental Impact Statement. Natural and organic alfalfa supply is threatened by the very real potential of GM contamination. This would destroy the organic meat and dairy industry.

Last Friday, a federal court took a tougher position on GM sugar beets. Judge Jeffrey S. White revoked USDA approval of the GM beet, while allowing for its planting this year only.

Also this month, a British farmer exposed that milk and meat from cloned animals had secretly entered the food supply.

Meanwhile, President Obama has stacked his Administration with biotech insiders going so far as to appoint Islam Siddiqui as Agriculture Trade Negotiator. Siddiqui is a former pesticide lobbyist and vice president of CropLife America, a biotech and pesticide trade group that lobbies to weaken environmental laws.

The US is pushing hard at the world to accept GM foods. Recently, the American Farm Bureau Federation called for stronger sanctions against the European Union for its GM crop ban.

But as governments and trade agreements circumvent the will of the people, some take matters into their own hands. The rise in GMO crop destruction is a clear indication that the world’s people reject chemical and genetic pollution of the food supply and the environment.