Masanobu Fukuoka: The man who did nothing 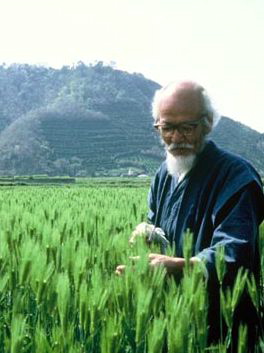 More than 30 years after it was published, farmer sage Masanobu Fukuoka’s cult book, One-Straw Revolution, continues to inspire. On the occasion of his second death anniversary, DNA talks to Indian farmers whose lives were transformed by Fukuoka’s radical vision of farming, nature, and life. [Read one chapter from One-Straw Revolution here. ~Ed.]

Do-nothing or minimal interference is a radical idea. Especially for a civilisation obsessed with jumping from one complexity to another while simultaneously idealising simplicity. In 1983, a group of 20 farmers in Rasulia, a small village near Hoshangabad in Madhya Pradesh, was trying to find an alternative to chemical-intensive agriculture. Since 1978, they had been battling the legacy of the Green Revolution — hybrid seeds, pesticides, fertilisers — to redeem the promise of rishi kheti (farming as practiced by ancient sages), a practice that involves letting nature take its course.

They were successful. But there was more to be done, or rather undone. What that was, they weren’t sure. But they were open to learning.

It was no coincidence, then, that they attracted the internationally recognised Japanese spiritualist and Buddhist farmer Masanobu Fukuoka into their lives. One of the Rasulia farmers, Pratap C Aggarwal, came across a review of Fukuoka’s The One-Straw Revolution. Here he heard of the ‘no-till’ technique, a farming philosophy pioneered by Fukuoka. Aggarwal couldn’t wait to read the book, which was not published in India back then. So he wrote a friend in London asking her to send him a copy.

15 responses to “Masanobu Fukuoka: The man who did nothing”