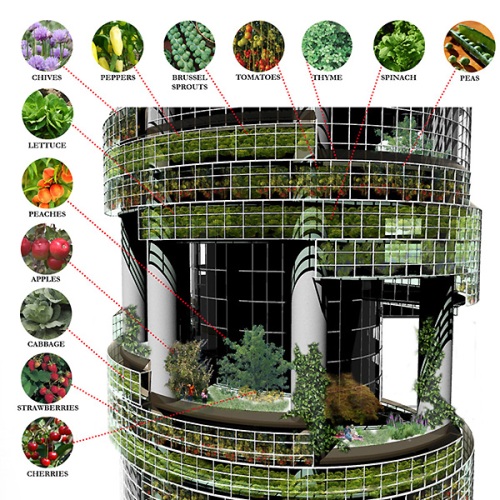 There is an Organic Revolution taking place that is focused on self-sufficiency as the primary goal. Two new farming methods show great promise for growing an abundance of healthy food on a small footprint of land, and may be instrumental in feeding a growing world population, write Edwards and Green.

By all honest accounts, 2010 has been a terrible year for traditional agriculture worldwide. Extended severe weather events have cut many crop harvests in half. Farmers are going bankrupt as crops fail, commodity prices are exploding, and millions of people more have been added to the list of those who go hungry on a regular basis. Already a record 40 million Americans are receiving food stamps at a time when the economy is a disaster and state and Federal governments are essentially bankrupt.

The near- to mid-term looks to be a time of immense hardship; yet, in times of hardship come great innovation as people are spurred from their complacency and forced to become participators in their own survival. There is an Organic Revolution taking place that is focused on self-sufficiency as the primary goal. Despite how power brokers have aimed to co-opt the movement, individuals must remain steadfast in their pursuit of living a simpler, healthier, and less-dependent lifestyle.

Our modern way of life is centered on mega-cities. This will continue, as the percentage of the global population living in, or very close to, major cities rises to 80%. It would make sense, then, that any new innovative farming system should begin here, as it will benefit the greatest number of people. Up until recently, Genetically Modified Foods have been the most prominent farming innovations, despite their obvious flaws. Now, two new farming methods show great promise for growing an abundance of healthy food on a small footprint of land, and may be instrumental in feeding a growing world population.

The first innovative way of creating food with a limited footprint by using the concept of the skyscraper in order to use plentiful vertical space to supply cities with organic produce. This new system is called Vertical Farming. According to Vertical Farming’s founder, Dickson Despommier, a thirty-story building could feed 50,000 people. An estimated 165 of these “farmscrapers” would feed all of New York City — each building with the footprint of 1 city block (approximately 1 acre). His calculations were based on a project he assigned to his students at Columbia University.

Indoor farming is, of course, nothing new, but as Despommier mentions on the Vertical Farm Web Site, “What is new is the urgent need to scale up this technology to accommodate another 3 billion people.” The concept of Vertical Farming solves a multitude of problems; Verticalfarm.com lists 15 advantages. Here are some highlights:

And Vertical Farming is not limited to produce; preliminary plans include chickens, ducks, geese, fish, crustaceans, and mollusks to be raised within the same building, creating one large integrated system of food production.
Vertical Farming could very well be the answer for supplying the world’s growing population who are destined to go hungry if innovative solutions are not implemented quickly. The economic crisis has indeed left abandoned buildings and empty malls and houses in its wake. Think of Detroit, for example: what a great concept Vertical Farming would be in a place that has upwards of 50% unemployment, and a completely ravaged urban environment. Buildings can now be bought for pennies on the dollar, and the vast unemployment offers a ready and willing labor pool. Vertical Farming is urban revival at its most basic and needed level. 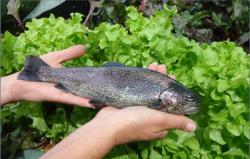 Imagine growing fish and plants together in one integrated system.  This is the promise of Aquaponics.  For those who would like to take a quick first step toward self-sufficiency, aquaponics might offer the least expensive, least time-consuming path to creating your own sustainable ecosystem.
Aquaponics is a full simulation of nature where fish and plants are both kept healthy and productive through a balance supplied by each in a recirculating environment.  The aquaculture side offers nutrient-rich water that is provided as natural fertilizer for plants.
These nutrients are normally a disposal problem for fish farmers who need to eliminate the toxic waste.  On the other side, hydroponics desperately requires nutrient-rich water in order to grow in a soil-less environment, so the plants serve as a natural filter for the fish.  This mini-ecosystem is surprisingly easy and relatively inexpensive to set up thanks to emerging science and technology.
The beauty is in the small scale.  Just as micro-farming has taken root in urban environments, aquaponics can utilize a home aquarium, a mini garden of herbs, vegetables, or even flowers.  This is known as Desktop Aquaponics and serves as a great showpiece, or as an educational microcosm of what is possible through the fusion of fish and plants. And, yet, according to Aquaponics.com it is possible to convert a backyard into a system that grows hundreds of pounds of fish and all the fruits and vegetables a family needs.
For further education, visit Growingpower.org, a non-profit organization that has been instrumental in bringing this new concept to fruition mainly in urban settings.  They offer workshops in aquaponics and portable farms.
Once you are ready to begin your own endeavor, take a look at BackyardAquaponics for full systems information.  The great news is that for less than $2,000 you can begin taking the step toward self-sufficient food production . . . no matter where you live.