In his latest book, The Raw  Milk Revolution: Behind America’s Emerging Battle over Food Rights, David Gumpert details several cases of malicious prosecution against the natural dairy industry, reporting the myths, exaggerations and deceptions by authorities charged with protecting the food supply.

What you won’t get from the book is a whitewash of the raw milk movement. Even advocates were caught exaggerating claims or ignoring evidence. Gumpert also includes tender, heart-wrenching stories in the words of mothers whose children became critically ill from drinking contaminated raw milk, or so they believe. Though the link was never scientifically made in those cases, it was in others, including a raw milk herd share. Gumpert bridges compassion for those mothers with compassion for dairy owners who are financially wiped out by the government’s strategic war on private food arrangements.

From the cases explored in the book, and from recent government actions and statements, it becomes clear that food safety authorities are using their power to destroy competition of drugged, genetically engineered, factory processed foods.

For years, writers and researchers have shown how regulatory agencies have been captured by industry. President Obama exemplifies this in his Food Policy picks, recruiting directly from biotech firms like Monsanto and lobbying groups like CropLife America. His Supreme Court pick, Elena Kagan, in her capacity as Solicitor General, intervened on behalf of Monsanto in the first case to reach the US Supreme Court regarding genetically engineered food.

In the potent Foreword to the book, farmer Joel Salatin admits:

“When the public no longer trusts its public servants, people begin taking charge of their own health and welfare. And that is exactly what is drving the local heritage food movement.” 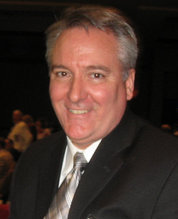 Apparently bent on stopping the ‘local heritage food movement’ is John F. Sheehan, whom the FDA hired in 2000 to head its Dairy and Egg Safety Division. Gumpert spends much time on this elusive bureaucrat, a patent lawyer with a bachelor’s degree in dairy science.   Sheehan’s actions epitomize the destruction that captive agencies can wreak on small producers when regulators cater to monopoly interests. (Image of John F. Sheehan, FDA Director of Dairy & Egg Safety, by David Gumpert. Used with permission.)

Gumpert, an investigative journalist focused on the intersection of health and business, found Sheehan’s background elusive.  The FDA stonewalled Gumpert’s efforts to gather information about him, only revealing that Sheehan worked in the large end of the dairy industry for 17 years.  Many efforts to meet him failed. Gumpert admits with a little embarrassment that he traveled 2,500 miles just to photograph the man. Alas, Sheehan refused to speak to him, as did other FDA regulators.

That John Sheehan is a patent lawyer is not incidental. Concentrated animal feeding operations use patented, genetically modified drugs and feed. Having a patent lawyer head the FDA’s Dairy and Egg Division benefits the biotech end of food production. That may reveal Sheehan’s loyalties, which in turn may reveal what’s driving the FDA’s war on natural food.

Sheehan’s preferential treatment of Wright County Egg, which was involved in this year’s half-billion egg recall after 1,500 people were sickened by salmonella poisoning, stands in perfect contrast to his malevolent war on natural milk suppliers whose products sickened no one.

So what concerned the Dairy and Egg Safety Czar during all of this?  Rawesome Foods, a natural food distributor in Venice Beach, California, whose products sickened no one.  In June, authorities burst onto the premises of this private food-buying club with guns drawn, in a shockingly excessive show of terrorizing force. And, for what? A misdemeanor infraction, improper licensing?  They physically searched all the employees and confiscated product.  The now notorious Rawesome Raid epitomizes the disparate treatment Sheehan affords natural foods compared to drugged, genetically modified ones. Security cameras caught the action on film:

“I think the Rawesome raid, conducted by agents from a half dozen agencies, with their guns drawn, was meant to send a strong message to farmers and consumers alike that the government is intent on discouraging private food distribution arrangements,” Gumpert told me via email.

Lest anyone doubt this, in a 2010 court filing, the FDA and its bureaucratic superior, the Department of Health and Human Services, asserted that Americans have “no fundamental right to freedom of contract.”  They went even further, denying that we have a right to eat foods of our choice, and that we don’t even have the right to health.

Think about that for a moment: the federal agencies in charge of food safety and protecting human health believe we do not have a right to health.  Is this who we want determining what food and drugs are safe for us?  Would you trust your diamonds to someone who doesn’t believe you have a right to them?

In furtherance of the FDA’s war on private food contracts, in September, Rawesome supplier, Morningland Dairy, was ordered to destroy all of its cheese.  Working closely with Morningland, Doreen Hannes noted that this was done after authorities reported finding “listeria monocytogenes and staph aureous in two cheeses.” She stated that regulators showed up without proper documentation for these tests: no batch numbers, no product code numbers, no chain of custody, and no bacteria levels — just a picture of cheese with the Morningland label and the word of gun-toting uniforms.

No one became ill from any of Morningland’s or Rawesome’s products, yet 1,500 people were sickened by salmonella tainted eggs over a period of months, before Sheehan finally did something about it. What he did not do was order the destruction of all of DeCoster’s chickens and eggs. What he also did not do was hold DeCoster at gunpoint.

“The shutdown of Morningland Dairy was a pathetic attempt by the U.S. Food and Drug Administration, acting through California and Missouri agriculture agencies, to justify the Rawesome raid,” Gumpert told me.  “No food producer in this country gets shut down because traces of listeria are found in their food, so long as no one has become ill and the company has shown a willingness to work with regulators, as Morningland has.”

Ironically, Morningland sits between two sections of the Mark Twain National Forest in southern Missouri. An apt quote of this famous anti-government writer might be:  “The government of my country snubs honest simplicity, but fondles artistic villainy.”  Is it not villainous of corporate giants to place their managers inside regulatory agencies to remove competition? 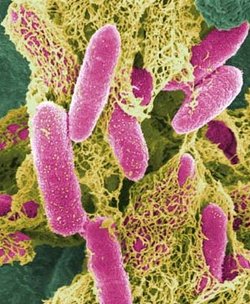 Raw Milk Revolution also explores the debate between the germ theory of illness, to which Western (allopathic) medicine subscribes, and the holistic theory (homeopathic), which the probiotics community hails. One seeks to wipe out all microbes (via drugs, vaccines and pasteurization) to make food sterile. The other recognizes that microbes act in accord with the biological terrain in which they live, and so promotes consuming live foods that boost “friendly” bacteria.  (This chart, which also appears in the book, nicely lays out the differences.  For a more detailed explanation, see Biological Terrain vs Germ Theory.)

Gumpert quotes the probiotic argument: “People certainly can and do get sick from pathogens, but they do so because of failures in their own immune systems, rather than because the germs are so strong.”  He then refers to “an entire body of research [that] has emerged on the benefits of probiotics in preventing illness.”

Recognizing this ideological difference, Salatin asks, “Is not freedom to choose our food at least as fundamental a right as the freedom to worship?”

The essence of Raw Milk Revolution boils down to a chapter title: “When it comes to food, how much freedom should we have to take risks?” Government does not grant rights, but if we don’t assert them, it will trample them.

Given free reign, the FDA would deny the American people the right to believe as they wish, to eat as they wish, and to make private food arrangements outside the industrial food system. Legislation like S 510, the Food Safety Modernization Act, would give the FDA even more power to “modernize” foods by sterilizing them via heat, drugs and chemicals, or by secretly adding nanoparticles and genetically modified ingredients.

Mark Twain might have a comment on this: “No man’s life, liberty, or property is safe while the legislature is in session.”

Humans have been drinking and trading raw milk and its products (cheese, yogurt, kiefer, etc.) throughout history.  The bulk of the world favors raw milk.  France, for example, provides vending machines for travelers. Even England’s monarch is a raw milk fan. Brian Lewis reports:

“It’s also said that Her Majesty is so keen on it that when grandsons princes William and Harry were at Eton, raw milk from the monarch’s Windsor dairy herd was delivered daily to them at the school.”

Risk aside, I tried my first raw milk while writing this.  So far, so good. Not dead and not strapped to the porcelain bowl.

By denying our right to eat food with which we evolved, the FDA ignores science.  Just as the biotech industry ignores scientific reality that genes operate on an entire genetic platform that is influenced by an internal and external environment, the myopic Germ Theory also ignores the role that our entire organismal system plays on whether we become sick or stay healthy. To quote Joel Salatin once more:

Not just natural milk fans, but all who seek private food arrangements will appreciate Raw Milk Revolution. The number of cases discussed and his close look at the scientific arguments provide solid ground for defending the right to make our own food choices. He also reveals just how far CorpoGov will go in shutting down all competition to industrial food. The book is indispensable for anyone writing about the food wars: key arguments, cases, people, and organizations are listed in the expansive index for easy reference.

Gumpert closes his book with a warning:

“If secretive government regulators are successful in their efforts to deprive consumers of unpasteurized dairy products, they will be emboldened to push us farther toward their vision of reliance on sterile factory food.”