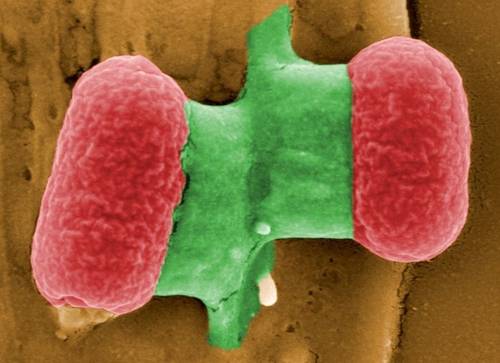 Food Freedom has deliberately refrained from posting any suggestion that Germany’s superbug is related to biowarfare, until further evidence emerged. Various sources now corroborate this story, including The Atlantic:

“On Tuesday [May 31], the German newspaper Süddeutsche Zeitung reported that [leading German E. coli researcher Helge] Karch had discovered that the O104:H4 bacteria responsible for the current outbreak is a so-called chimera that contains genetic materia from various E. coli bacteria. It also contains DNA sequences from plague bacteria, which makes it particularly pathogenic.”

Though he emphasized “There is no risk, however, that it could cause a form of plague,” Karch added that plague DNA sequences make the superbug “particularly pathogenic.”

Also, it is interesting timing to note that the European Union banned herbal remedies on May 1, 2011. Below is Dr Rima Laibow’s summary of this developing story.

They tell us the “Super bug E. coli 0104:H” is terrorizing Germany, causing otherwise healthy people to develop Hemolytic-Uremic Syndrome (HUS) in which their kidneys fail, their red blood cells explode and then, tragically, they die.

Germ sleuths and clinicians alike have been even more horrified than the average Spanish cucumber eater (the vegetable pinned with the blame for the lethal outbreak). The general public just wants the disaster to go away. The doctors want to know why, what and, now, WHO is responsible.

E. coli is found in the guts of every mammal and is generally harmless. In fact, it is present in massive quantities: half of the volume of the normal bowel excretion is made up of their huge numbers. But when a good germ goes wrong, it can cause disease in the host or anyone who picks it up through contamination or lack of hygiene.

And E. coli 0104:H4 has gone very, very wrong, with, it would appear, quite a bit of help from its friends.

Mike Adams, the intrepid Health Ranger, revealed to the English speaking world that this extraordinarily aggressive E. coli (from a family of bugs which are normally passive and non-aggressive in the extreme) had been systematically genetically altered through laboratory manipulation, to be totally resistant to 8 classes of antibiotics.

“European health authorities are leaping at the opportunity to spread fear about organic foods while ignoring the obvious true cause of the contamination in the first place — the widespread abuse of antibiotics in animal farming operations… The e.coli blame game has become a circus of musical chairs. First, they blamed the Spaniards as a form of retaliation for Spain’s resistance to accepting GMOs. This act drove Spanish farmers into bankruptcy through a savage campaign of rumor-mongering. After ravaging the Spanish vegetable farmers, they began to randomly instill widespread fear about a variety of vegetables: First it was cucumbers, then lettuce and then finally tomatoes. And now, the blame has come full circle and is now being cast upon organic sprout growers in Germany!”

He pointed out, quite correctly, that without sustained and careful laboratory manipulation there would be no way for this organism to acquire total resistance to these drugs since the drugs are not used in agriculture and the bacteria would not encounter all eight of them in nature.

This is the only rational conclusion to which the evidence points.

Of course, by who, and why, the altered organism was deployed has not yet been established. A psychotic graduate student with aspirations to be a mass murderer? A corporate ploy to discredit independent agriculture and force the total industrialization of food to keep it “safe” from contamination (that is, the organized intentional contamination of all food by the folks who make the agrochemicals and GMOs which allow more of them to poison us and the drugs that you take when you get sick from the food)? A dedicated globalist loyally pursuing the “great culling” of us “useless eaters”?

So what we knew was that a forced natural selection had been used to create killer super-super bugs. Now we know that genetic manipulation of the GMO sort has been used, as well. Truly, a weaponized bug if there ever was one…

Helge Karch, the director of the Robert Koch Institute (Germany’s CDC). who heads a consulting laboratory at the Münster University Hospital in Germany says that he has discovered that the super killer contains DNA from E. coli, which is what he expected. It also contains (unexpectedly for those who don’t expect such genocidal manipulations) DNA from the organism that causes plague, responsible for wiping out a quarter of Europe’s population during the Black Death (1348-1351).

Please pay attention here: we are talking about the Black Death. Seriously.

Bubonic plague is caused by Yersinia pestis and is one of the most feared of all disorders. So when Dr. Karch blithely assured the German population that there is little danger of an outbreak of plague from this organism, he is clearly whistling through his Spanish cucumber.

Although we all love to be reassured, there is no one on planet Earth who can reassure us that we are not already facing a new plague. This one, however, rather than resulting from an unplanned, but wildly toxic combination of rats, lice and history, would be the intentional outcome of an unnatural selection process and a high-tech genetic manipulation to create a death bug. A weaponized bug.

Deny the genocidal agenda at your peril. I, for one, can see no reasonable option to the conclusion that the mad [wo]men at the helm of the realm are consummate murderers, killing randomly for their own unspeakable ends.

A bright note, however: there is no way in which any organism can become resistant to nano silver. None. Faced with the presence of a plague, a weaponized super plague, an ordinary infection or a genocidal assault through organisms of death, I want nano silver on hand, lots of it. Nano-silver is a nutrient that supports normal immune system function.

Ah, yes, nano silver was declared illegal in Europe on January 1, 2011. Can’t use an illegal substance, now can we. The good people of Europe are expected to be good citizens of the New World Order and… just die.

Civil disobedience, anyone? Or perhaps the people are ready to fight for their silver!

I get mine, which is called “Silver Sol” at www.Nutronix.com/NaturalSolutions. You should, too.