A confluence of events created a “perfect storm” for widespread salicylate toxicity. The loss of Bayer’s patent on aspirin in February 1917 allowed many manufacturers into the lucrative aspirin market. Official recommendations for aspirin therapy at toxic doses were preceded by ignorance of the unusual nonlinear kinetics of salicylate (unknown until the 1960s), which predispose to accumulation and toxicity; tins and bottles that contained no warnings and few instructions; and fear of “Spanish” influenza, an illness that had been spreading like wildfire.   ~ Dr. Karen Starko

Given the role that it played in the millions of 1918 deaths, a further look at aspirin is in order.

Bayer aspirin was one of the earliest of drugs from the pharmaceutical industry, dependent on the oil industry, and has become the most commonly used and trusted drug.  As such, it exemplifies the displacement of natural treatments by synthetic drugs.

During 1918, repeatedly, first hand medical accounts point to aspirin as the source of pneumonias. In collecting these accounts, Julian Winston notes in 1998: “In reading the accounts of the epidemic it seems that most of the deaths were caused by a virulent pneumonia that was especially devastating to those who depressed their system with analgesics – the most common being aspirin.”

Here’s one of the accounts he reproduced:

“I had a package handed to me containing 1,000 aspirin tablets, which was 994 too many. I think I gave about a half dozen. I could find no place for it. My remedies were few. I almost invariably gave Gelsemium and Bryonia. I hardly ever lost a case if I got there first, unless the patient had been sent to a drug store and bought aspirin, in which event I was likely to have a case of pneumonia on my hands.” -J. P. Huff, MD, Olive Branch, Kentucky.

“I saw that the people who were taking aspirin were dying, about half those who were drinking a lot were dying, and those that received homeopathic remedies were living.”

Aspirin was the first of the non-steroidal anti-inflammatories, the others not available until 1955 when Tylenol was first marketed.  They are the most commonly used drug on the market, sold over the counter and by prescription.

For Bayer and the pharmaceutical industry, they are the unquestioned basics of their industry.

Yet they all routinely kill.

“Over 100,000 people are hospitalized for GI bleeding and of those 16,500 die every year. And these values are considered ‘conservative.’

“Also the figures only include prescription NSAIDs used to treat only arthritis and only in the United States. If prescription and over the counter NSAID-related hospitalizations and death rates were counted for not only arthritis, but for all conditions, and throughout the world, the figures would no doubt be enormous. Taking those figures and applying them over the many years that this class of drug that has been available since the early 1970s and the numbers would be horrific.  And yet, no study to date has attempted to quantify these figures.”

He then reposts a graph from The New England Journal of Medicine article by M. Wolfe, et al., “Gastrointestinal Toxicity of Nonsteroidal Anti-inflammatory Drugs”, (June 17, 1999, Vol. 340, No. 24, pp. 1888-1889), which shows this alarming statistic relative to other causes of deaths: 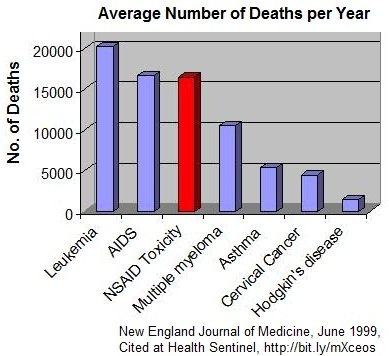 U.S. Mortality Data for Seven Selected Disorders in 1997. A total of 16,500 patients with rheumatoid arthritis or osteoarthritis died from the gastrointestinal toxic effects of NSAIDs. Data are from the National Center for Health Statistics and the Arthritis, Rheumatism, and Aging Medical Information System.

Aspirin, the first of this class of drugs, has existed since the 1800s.  How many people has it alone killed?

Another useful graph compares “yearly estimated NSAID deaths since 1991 with the number of murders committed with firearms each year in the United States and with the number of U.S. Forces killed in Vietnam if that war was being fought in the 1990s instead of 1961-1972,” Bystrianyk writes:

The graph assumes a linear increase in the number of NSAID deaths; the actual numbers are unknown. But, Bystrianyk repeats that the “16,500 NSAID deaths per year is considered conservative” since it does not include over the counter medications or prescriptions for conditions other than arthritis.

“Another important observation is that most people have no warning signs that these drugs are causing them internal damage before ending up in the hospital with a serious medical condition. And as we have seen from the statistics, approximately 10% of these hospitalizations end in death….

“Even aspirin, the first NSAID that was synthesized over 100 years ago by Felix Hoffman at Bayer industries is not free of risk. And considering that aspirin is being highly recommended to reduce the incidence of heart disease we must consider the gastrointestinal damage being caused as well.”

“We found that no particular dose of aspirin between 75 mg and 300 mg daily currently used in cardiovascular prophylaxis is free of risk of causing bleeding from gastric or duodenal ulcers. Even very low (75 mg) doses of aspirin reportedly caused gastric bleeding in volunteers. … Some 10,000 episodes of ulcer bleeding occur in people aged 60 and over each year in England and Wales. … It [sic] may be deduced that 900 of the 10,000 episodes could be associated with and ascribed to prophylactic aspirin use. A general change to low doses (75 mg) of aspirin would not eliminate the risk….” [Emphasis added]

“Unfortunately the risk of hospitalization and death is not the only possibility from taking these types of drugs. Other studies also indicate that the risk of Congestive Heart Failure (CHF) while using NSAIDs is also quite substantial. One author suggested that the number of deaths could be similar to those that are being seen with gastrointestinal bleeding. If so the numbers of deaths attributed to NSAIDs would increase dramatically from the already large figure of 16,500.”

His source is J. Page and D. Henry from their March 2000 article in the Archives of Internal Medicine, “Consumption of NSAIDs and the Development of Congestive Heart Failure in Elderly Patients”:

“In this study we found that recent use of NSAIDs by elderly patients doubles the odds of being admitted to hospital with an episode of CHF [Congestive Heart Failure]. The estimated relative risk for first admission with heart failure, and the risk of this outcome was increased substantially by NSAID use in those with a history of heart disease.… Assuming the association between use of NSAIDs and CHF is unconfounded, the disease burden attributable to these drugs may be large – approaching the levels of morbidity and mortality that we have previously documented for serious upper gastrointestinal complications of NSAID use in NSW [New South Wales].”

The following statement Bystrianyk made about all NSAIDS (including Bayer aspirin) could as easily characterize what happened during 1918, including the complete silence surrounding Bayer’s drug – aspirin (and the generic versions) – that is now implicated in killing millions of people during 1918.

“NSAIDs are truly a silent epidemic that have caused a tremendous amount of pain and death. Public knowledge of this tragedy is virtually non-existent with an enormous amount of information written primarily existing within the sanctuary of medical libraries. Pharmaceutical companies still market and promote worldwide sales of these toxic substances and governmental agencies have done nothing of any substance to alert the public.”

Of course, research continues to expose the hazards of NSAIDS. One site that tracks current research is Pain-Topics.org. In May of this year, Stewart B. Leavitt, MA, PhD, wrote, “Results of the new research suggest that even short-term use of these pain relievers is unsafe for [heart attack] patients with pain.” In that piece he also mentions adverse effects on the liver, as well as the heart.

Given all the information presented so far in this series, a set of questions arises as to Bayer’s culpability and influence over regulators. In the next and final installment, we pose those questions.

21 responses to “Bayer and Death: Aspirin Deaths Continue Beyond 1918”