Saving Nutritional Supplements: A Battle For Nature, Truth, and Life Itself 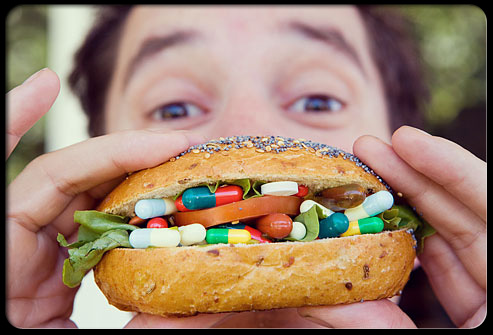 We know how hard people are fighting now to save the economy, to stop the wars, to prevent more nuclear power plants, mountain top mining, fracking, and more drilling, to stop genetic engineering, and incredibly importantly – save our farmers and ranchers. [Image]

All the issues listed above involve fighting the original robber barons – the Rockefellers who got rich in oil, banking, steel, … but then they went into pharmaceuticals, following, it seems in the footsteps of John D Rockefeller’s father.

Here is a unique religious perspective on the Rockefellers, the beginning of which includes bogus “cancer cures” and insecticide.

“The history of the Rockefeller family began, not with Standard Oil and not with honor, but with a con man, womanizer and a thief. Various authors note that the Rockefeller ‘oil’ beginnings were not solely from ‘crude oil.’  John D. Rockefeller Senior’s father, William Avery Rockefeller, ‘Big Bill,’ was a traveling salesman who advertised himself as a ‘William Rockefeller, the Celebrated Cancer Specialist’ and who hawked ‘herbal remedies’ and other bottled medicines.’ He guaranteed ‘All Cases of Cancer Cured Unless They Are Too Far Gone’. Those claims allowed him to charge $25 for his magic cancer, which he retailed for $25 a bottle, a sum then equivalent to two month’s wages. The ‘cure’ survived until quite recently as Nujol, consisting principally of petroleum and peddled as a laxative. Nujol was manufactured by a subsidiary of Standard Oil of New Jersey, called Stanco, whose only other product, manufactured on the same premises, was the famous insecticide, Flit.

The Rockefellers’ involvement with eugenics and genocide are well known.

“By the 1920s John D. Rockefeller, the founder of the Rockefeller dynasty, was funding the notorious ‘racial hygiene’ think tank Eugenics Records Office. Its ideas of mass sterilization, the ‘inferiority’ of Black people and ‘breeding better humans’ directly influenced Adolf Hitler and provided ‘scientific legitimacy’ for the Nazi race laws….”

But less focused on is their hubris for they not only seek to control human life but to “better” nature itself, for the drug industry was not based on nature but on their own product, coal tar, as the building block for creating new synthetics molecules, and from there, increasingly toward creating synthetic DNA and even synthetic life.

Synthetics mark the beginning of a massive breach between man and nature.  Thanks to the pharmaceutical industry, the world turned away from nature to man-made molecules.  Dire consequences showed up almost immediately.

In 1918-19, the leading synthetic drug on the world – aspirin – contributed to the death of millions.  The deaths were falsely attributed to a foreign flu.  The natural substances used by homeopaths boost the immune system, but synthetic aspirin strongly suppresses it.  People died from common upper respiratory infections that became serious pneumonias which caused death.  Or people died within hours from the sheer toxicity of aspirin, and it kills as rapidly today.  The pharmaceutical industry-controlled CDC is still promoting the myth of a flu.

Homeopaths saved almost everyone who came to them.  So, why don’t we all know this?

Because just after 1918-1918 proved beyond a doubt that natural medicine heals and synthetics kill, the Rockefellers took control of medical schools, medical education and medical research, and put homeopathic hospitals out of business.  History is supposed to belong to the victors, but natural medicine was the victor, Rockefeller power overrode the its stunning success.  In Rockefeller hands, medical education taught that a frighteningly virulent “flu pandemic” was responsible for the death of millions and has milked that groundless terror of nature for increasing profit and for massive power.

Nature didn’t kill anyone – it saved people through homeopathy remedies, but a terrifying “virulent” foreign flu became the means to conceal that the new synthetics had caused the largest industrial catastrophe in history (even up to today).  This worldwide disaster heralded the beginning of “synthetics” which then became the core of modern medicine.

Synthetics have offered many things, but a short list includes BPA that severely disrupts human and animal endocrine systems; PCBs, one of the most deadly toxins on earth; prescription drugs that are the leading cause of death in the US; vaccines that cause cancer, degenerative diseases, and death ; genetic engineering wreaking havoc on animals, people and the land and threatening the gene pools of so many species.

But the Rockefellers have ensured through their control of media, of medical schools, of research facilities, of the AMA, the CDC, the WHO, and the Institute of Medicine, that the public is not aware of the nightmare we are imprisoned in – medical treatments that sicken and never cure, profit dependent on our illnesses, doctors miseducated to trust drugs and not educated about nutrition.

Nutrition.  It sounds like such a minimal thing beside the giant edifice that is MEDICINE and PRESCRIPTION DRUGS.  But nutrition is the molecular support for life.  As vitamins, [they] and other effective natural health therapies … optimize cellular metabolism.  Nutrition is the intermediary between nature and us that sustains our lives and heals our diseases.  Our cells need precisely what nature provides.

One understands this vividly just in seeing the astounding scope of what even one supplement – magnesium – offers.

Synthetics are a mismatch with our bodies.  That was proved conclusively in 1918 and 1919.   And aspirin is still killing people.  There is no dose at which it is not toxic and cumulatively so.  A misfit between man’s body and synthetics.  Aspirin is taken to control pain but cherries are potentially ten times stronger in doing so and in lowering inflammation.  No deaths.  No disconnect between the molecular structure of cherries and the human body.  Quite the reverse.

And despite all we been force fed by media about its toxicity, no one has yet found any dose at which vitamin C is toxic.

A dramatic demonstration of the abysmal fit between synthetics and living creatures is the reaction of animals to genetically engineered (synthetic) corn.  They avoid it.  It may look like corn to us, but not to rats, geese, deer, who are fine with natural corn.  Those forced to eat it vomit and in various ways express pain.

The creation of synthetics by the pharmaceutical industry was a historical break in the web of life.  Something entered into the world that is not derived naturally, that does not fit, does not contribute, does not decompose normally, does not break down into valuable components, and does not come back together into new healthy life.  Rather than being part of a perfect cycle, with synthetics a cul de sac occurred.  A dead end.  Disease and death followed from its not-nature.

Supplements, on the other hand, are bottled nature.

Pharma, the industry that has turned the world into a synthetic and poisonous cesspool, is killing people with synthetic drugs, is creating not only synthetic bio-weapons but synthetic diseases and is making vaccines to alter people’s DNA with genetically engineered DNA of viruses, now wants to remove access to its true competition – nutritional supplements – suggesting they are dangerous.  Quite a reversal of truth.  Back to trying to cloak that defining historical moment in 1918-19, when natural treatment were stunningly life-giving, when synthetics were exposed as deadly at a monumental scale.

Nature is the perfection we are trying to battle back to through the toxins being pumped out by industrial synthetics.  This battle back to nature is up against those who stole homes, jobs, manufacturing, the economy, an America we love, and who wish to make sure nothing stands between them and the diseases they are planting as an endless crop for their profits.  They know supplements means cure which is why they hire Interpol to kidnap, block manufacturers, order raids, and work over years to imprison doctors.  The bankers have reached their moral nadir.  They want cancer for this country and are unceasing in this.

Supplements are essential to save our children’s health and their future.  Supplements are our NO to synthetics and to those behind them who have visited catastrophes on our world and are destroying our country right now, out of a boundless arrogance, greed, and power mania to control the world.

This is the battle for nature we all have the right to . (Video)

Fight for nutritional supplements here – to always be able to offer nature itself as health and healing to those you love.

Related: Supplements Set to Become Illegal in 2012 under FDA

4 responses to “Saving Nutritional Supplements: A Battle For Nature, Truth, and Life Itself”