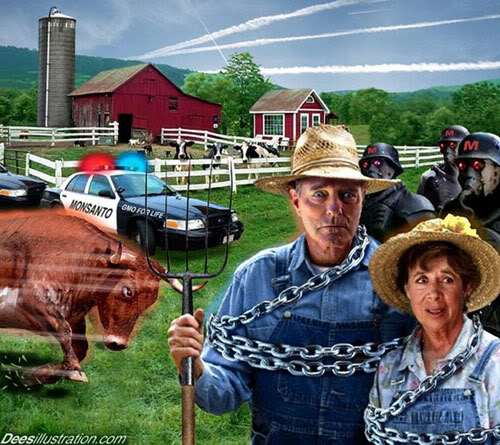 The U.S. Food and Drug Administration’s (FDA) apparent war on Amish raw dairy farmers increased on December 6 when they filed a “motion for summary judgment,” with Pennsylvania judge Lawrence Stengler asking for a permanent injunction against dairy farmer Dan Allgyer to forbid him from selling fresh milk out of state. FDA regulation 21 CFR §1240.61 criminalizes any selling of milk intended to cross state lines.

After a two year expensive, exhaustive undercover operation, including multiple armed raids on Allgyer’s farm, FDA agents and a team of ten federal lawyers amassed over two hundred and seventy-six pages of evidence allegedly proving what Allgyer openly admits, that he is selling fresh (raw, unpasteurized) milk to customers who knowingly carry the milk across state lines. Thousands of Maryland customers who have been buying from Allgyer for years were the main focus for evidence during the investigation. In spite of the FDA raids and injunction filing, Allgyer has continued to support his customers’ needs for fresh milk and other farm foods, citing his God-given inalienable rights.

Like most Amish, Allgyer is reluctant to participant in the legal system, but he has chosen to respond and his response claims that the FDA action “has created a serious dilemma” by “violating [his] due process and equal protection under the law” and he “is prepared to proceed with a public court forum, if necessary.”

Should Stengler sign the motion, the injunction would not ban Allgyer from selling in Pennsylvania, but the Maryland families he supplies would lose their food source, he would lose his out-of-state business and would be subjected to strenuous regulation and unannounced, unlimited, unwarranted inspections at his expense, including costs of travel, food, lodging and per diems for inspectors. A single inspection could cost up to $10,000.

Allyger’s response argues that the FDA’s action, though classified as a civil action, is in reality “a quasi-criminal action…because of the severe sanctions and consequences that could occur as a result of the FDA investigation and the inspection” and as such “requires prior notice of the offense, probable cause and official complaint, which is totally lacking in this case.”

Organizers of the DC area-buying club Grassfed on the Hill, supplied by Allgyer, helped form the Raw Milk Freedom Riders in support of Allgyer and other farmers like him.

“The freedom riders are a group of consumers challenging the FDA’s regulation by engaging in deliberate civil disobedience. They demand the FDA cease prosecuting farmers and consumers for transporting raw milk across state lines,” says the group’s founder, Karine Bouis-Towe. “The riders have staged two ‘freedom rides,’ on November 1 they took raw milk from Pennsylvania to FDA headquarters in Silver Spring, Maryland, then on December 8 they transported raw milk from Wisconsin to Chicago, Illinois both times distributing the milk. The FDA declined to prosecute in both cases.”

The action against Allgyer is the latest in a string of FDA persecutions of Amish dairy farmers in recent years.

Information about farm raids at http://www.FarmFoodFreedom.