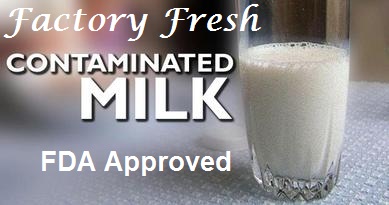 We have been taught to believe that pasteurized milk is free of bacteria and thus safe. That turns out to be dangerously untrue.    END_OF_DOCUMENT_TOKEN_TO_BE_REPLACED

Health Scandal of the Decade – Monsanto’s GMO Perversion of Food

In the 2010 growing season Monsanto plans to unleash its latest Frankenfood experiment on the American and Canadian public, a new version of genetically mutated corn with eight abnormal gene traits called Genuity SmartStax corn. It is the culmination of an astonishing scandal that has been steadily building over the past decade. During this time Monsanto’s mutated seeds have grown to 90% of the U.S. soy crop and 85% of the corn crop – and wheat is next on their agenda.

Their efforts have been marked by corporate bullying and have drawn the attention of the Justice Department who is conducting an antitrust investigation. All the while they have been spending millions on lobbying to fast track their agenda before the American public even realizes what hit them.