Another FDA shut down of raw milk that sickened no one 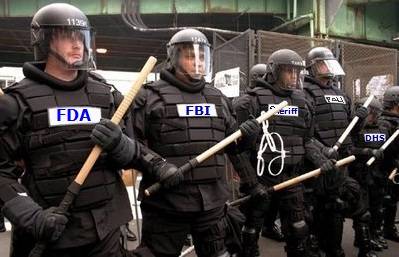 On Tuesday, April 26, the FDA revisited Pennsylvania Amish farmer Dan Algyer, serving notice that they have “filed a complaint for permanent injunction against [him], for distributing unpasteurized (or “raw”) milk for human consumption in interstate commerce,” according to the FDA press release.

What Dan Algyer does is as much a right as breathing. He has done nothing unlawful in conducting direct private trade with other individuals.  He is not engaged in interstate commerce as the FDA accuses. Aside from the Constitutional guarantees of right to contract, food sovereignty, of which Dan’s trade is a perfect example, is a God-given inalienable right.  No state has the right to proscribe the food choice of an individual. It might have the power through enforcement agents to hinder it, but it does not have the right.

Algyer was raided by the FDA last April when they came with a warrant to essentially gather evidence against him.  According to documents the FDA gave Algyer Tuesday, the FDA has had a spy in the buying club that gets fresh milk and milk products from Algyer since October 2009.  This person has allegedly written twenty-three checks to Algyer for his fresh milk in that time and has received the products. Let us hope, for that person’s sake, that he or she actually consumed the products and gained the benefits of fresh milk.

During that same period, approximately 200,000 people died from FDA approved medications, in government approved medical procedures, and following the direction of the FDA approved pharmaceutical companies. Not one person has been ill from Dan Algyer’s “dangerous” fresh milk.  “Drinking raw milk is dangerous and shouldn’t be consumed under any circumstances,” said Dara A. Corrigan, FDA’s associate commissioner for regulatory affairs, in the press release.

Please, do what Dan Algyer has asked. Either write or phone the FDA and speak out about this issue. As the National Consumers and Farmers Association (NICFA) says,

Express yourself. Tell them that you support Dan Allgyer. If you drink fresh, unpastuerized milk tell them that. Tell them that more people every day are drinking fresh milk and this is going to increase. It’s not going to stop no matter how many farmers they persecute. Tell them the government has no place between individuals and the farmers from whom they get their food.

Here are the address and phone number:

Please act soon. There’s no time to waste. The FDA is moving very fast now, taking down one real dairy at a time, redefining food as drugs that they can regulate out of existence, and trying to control your access to real foods, while letting poisons be inserted into your food supply by Agribusiness, and limiting your access to real information.