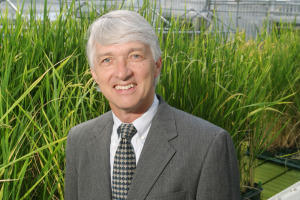 On a slow Friday afternoon, a surprising bit of news came down the pike: Roger Beachy, head of  National Institute of Food and Agriculture (NIFA), the main research arm of the USDA, has officially resigned his post, effective May 20.

Who is Beachy? When Obama hired Beachy in 2009, I got a case of policy whiplash, because it seemed to me that the administration kept whipping back and forth between progressive food-system change and agribusiness as usual. Beachy, you see, came to the post from the Danforth Plant Science Center, where had he served as the organization’s president since its founding in 1998. Nestled in Monsanto’s St. Louis home town, Danforth has long and deep ties to Monsanto.

According to its website, the center “was founded in 1998 through gifts from the St. Louis-based Danforth Foundation, the Monsanto Fund (a philanthropic foundation), and a tax credit from the State of Missouri.” Monsanto CEO Hugh Grant sits on the center’s board of trustees, along with execs from defense giant McDonnell Douglas and pharma titan Merck. Another notable board member is Alfonso Romo, a Mexican magnate who cashed in big during his country’s notoriously corrupt privatization /liberalization bonanza in the early ’90s, and who sold Seminis, the globe’s largest vegetable-seed company, to Monsanto in 2005. (Here’s my account of that deal from the time.)

In his short stint at USDA, Beachy never hid his enthusiasm for ag biotechnology — or his disdain for organic ag. When I met him at an agriculture conference in Mexico and asked him about funding for organic research, he came up with a novel slander against synthetics-free ag: “I’m concerned about the safety of organic food… I’m concerned about the issue of microbial contamination with organic.” It was a strange encounter; I wrote about it here. Beachy also hotly promoted GMOs, and thundered against organic, in a recent profile in Scientific American.