The literal enslavement of the American farmer 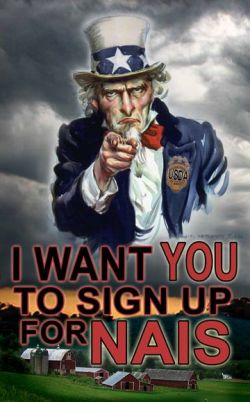 The “food safety” bills now being contemplated by Congress enslave farmers to an industrial system (having to do its bidding or face penalties and prison so severe they function as whips). The bills will demand purchase and application of petrochemicals and drugs, rendering the farmers not only slaves but paying slaves (or else giving up), with the land and animals poisoned and/or genetically engineered.

What is apparent is the depth of farmers’ desperation about it.  Repeatedly, I hear them talk about loss of freedom. I’ve taken “loss of freedom” as an expression of outrage at the bureaucratizing of farming, or a way of talking about huge governmental overreach, or as use of conservative or libertarian language to describe loss of personal or democratic or constitutional rights.  Symbolic speech, poetic speech.  But somewhere in the midst of trying to explain to someone how much was at stake and why farmers refuse to compromise because it would be acceding to something that can’t in any way be acceded to, something clicked.

I was in the midst of trying to convey why the effort to stop the bills in Congress now (and still coming) must be centrally focused on farmers themselves and not on other people’s food, when I found myself saying (in essence)

In the simplest terms, the bills enslave farmers to an industrial system (having to do its bidding or face penalties and prison so severe they function as whips) that will demand purchase and application of petrochemicals and drugs, rendering the farmers not only slaves but paying slaves (or else giving up) and the land and animals poisoned and/or genetically engineered.

Given that a hidden form of enslavement is at stake, it’s reasonable for farmers to look for reassurance that no accidental acceptance of any portion of those bills will happen.

It was only after writing it that I was jerked up by my own words and suddenly experienced them as neither symbolic nor hyperbole.  It struck me then that we are in fact looking at a new form of slavery.

I have always assumed that slavery was an historic event which we have rejected now morally and have made changes in law to codify.  I see our cultural repulsion at continuing forms of slavery as a sign of civilization having learned lessons about slavery and being committed now to stopping it wherever it still exists (even if it is hard to do).

So, it was not easy to recognize that bills being introduced are an actual form of enslavement of a whole class of people.  A new form.

What other word would people use to describe controls imposed on people that define work they must perform, down to the most extreme detail, or suffer penalties as high as $500,000 and ten years in prison for mere infractions?

For anyone who knows the least thing about farming and the wholeness of it and the value of manure and the help chickens give in eating bugs in a vegetable garden, or goats give as they eat back ivy, or pigs naturally give as turn over soil that can used for planting, the wrench of such utter nonsense is extreme.  But for a farmer to be commanded to do the very things that would destroy his farm – a place he knows intimately, the workings of which he lives moment to moment in sensitivity to his animals and crops, the lifetime of learning from those who know and from his own experience of each particular – is why this is slavery.

And within this enslavement by which the farmer is mandated to perform tasks that undo all animal husbandry and all needs of the soil and plants, he is also required to purchase inputs (feed, drugs, sprays … and likely GMO seeds will be chosen as well) so he is not only a slave but forced to pay the ones who enslaved him, for products he specifically would avoid.

We are used to seeing things in a familiar shape – slavery as a black man in chains, imperialism as foreigners on someone else’s soil and ruling by guns and fiat.  So, it is easy to be fooled that what is happening in agriculture is no relation to this but even progress.  But today, globalization is a new kind of master with immense power.  Its “plantations” are decentralized small farms scattered around the world and its involuntary “taxes” are levied through forced repurchase of seeds and biotech contract agreements and its plantation managers are lawyers with briefcases and its agents are thugs who spy on farmers and rough them up or the state itself which keeps them in line not through whips but through demanding they record their every move on computers and punishes and breaks and even kills them with prison or debt.

Shall we strip away our familiar templates and recognize that there “food safety” bills are the strangest lies because we are looking at multinational corporations as true totalitarian masters actually setting up to take over the land from farmers and control them as thoroughly as slaves were ever controlled, threatening their lives and all they hold dear if they do not obey.  But it has been such a slick thing how these masters present themselves – in boardrooms, with our politicians, running our agencies, in our courts, in science laboratories – that we miss the brutal, ugly, cruel, immoral reality.

24 responses to “The literal enslavement of the American farmer”